The Common Heritage of the Les Paul and SG Models

Two timeless classics that emerged from the same early drive to establish a cornerstone solid body electric guitar, Gibson’s Les Paul and SG arguably have more in common than not, yet the elements that distinguish them result in two very different instruments. You can perform many of the same tricks on each, certainly, but there’s no mistaking one for the other, either in terms of looks, feel or sound. Laying out the essential elements of each can help us get a handle on where and why the differences exist, and how they can work to our advantage, but first let’s take a brief look at how Gibson’s flagship single-cut ever became a double-cut in the first place.

The Birth of the SG: Evolving Styles

Despite the fact that it would eventually become the most-revered electric guitar every made, Gibson’s Les Paul hadn’t really found it’s groove by 1960. The model’s iconic form had been established by 1958, when the PAF humbuckers of ’56 were joined by a new sunburst top, but sales had still failed to catch fire. Gibson records show that after shipping 920 goldtops in 1956 and 598 in ’57, the company only sent out 434 sunburst Les Pauls in ’58. That number rose to 643 in ’59, then declined to 635 in ’60.

Part way into ’60 Gibson reassessed the Les Paul conundrum: the model was, on one hand, just too far ahead of its time (about six years, to be precise), while on the other it was viewed by many players as being too traditional, too stodgy even. At the turn of the decade, the trend was for flashy, sharp, colorful, pointy, and with all due respect, the Les Paul was none of these. With a body made of solid mahogany with an elegantly carved solid maple top, binding on the body’s top edge, and other time-tested elements of traditional Gibson luthiery, it was also an elaborately constructed instrument—amid a field of slab-bodied, flat-topped competitors—and arguably not worth the effort amid lackluster sales. 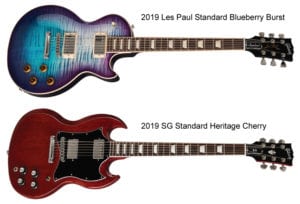 As such, it made total sense to kill three birds with one stone: transform the Les Paul Standard into a guitar that still sounded great and felt sublime to play, but which was both easier and less costly to manufacture, and which checked all the stylistic boxes for the trends of the day.

And Then There Were Two

The new model of ’61 shot off the line with a sleek double-cutaway body made purely of solid mahogany, with a pair of pointy and subtly asymmetrical horns that made it one of the sexiest guitar designs around. The body was also slimmer, and therefore lighter, than the chunky single-cut Les Paul that had preceded it—another bonus—and was finished in a bright cherry red, while its Custom counterpart came in flashy Arctic White, still with all the multi-ply binding and gold hardware bling.

This guitar remained the Les Paul Standard in Gibson’s catalog, while it’s fancy partner was the Les Paul Custom. After ’63, though, when Les Paul’s endorsement deal was on a temporary hiatus, it became known as the SG Standard, the name we’ve associated with the double-cut ever since, while earlier examples are now often referred to as “Les Paul/SGs”. In any case, the change-up worked, and the new design clearly sparked interest from a much wider swathe of players. Gibson shipped a whopping 1,662 units in the new version’s first year, not far short of three times the number of Les Paul Standards sold in 1960. The new Les Paul Custom, which now came with a white finish and three pickups, saw an equally copious upturn in production, with 513 shipped in 1961.

Other than the new chassis, the new double-cut Les Paul still received all the same hardware and electronics that the single-cut had had: Kluson tuners, Gibson’s Tune-o-matic bridge, and a pair of humbucking pickups, which were (for now) still the same PAF units with which the last of the ’60 single-cut Les Pauls had been equipped. The guitar’s neck was essentially the same, and the scale length was the same 24.75″ familiar to Gibson players. Given the extent to which pickups, hardware, and scale length play a role in forming any guitar’s sonic signature, these were certainly significant.

Most examples of the new Les Paul Standard and Custom came with one very different piece of hardware, however, in the form of the Deluxe Vibrato, often referred to as the “sideways vibrola” for the way it was operated. Little loved by Gibson fans, this unit was often simply ignored for fear of putting the guitar out of tune through too much use, and many early Les Paul/SGs were special-ordered with stopbar tailpieces (or converted to such) to bypass this vibrato’s inconsistencies altogether. By the time the Les Paul officially became the SG, the Deluxe Vibrato was fading from the picture, and SGs came standard with much more player-friendly tailpieces.

A Tale of Two Tones: SG vs Les Paul

Side by side, as configured today, there’s really very little between the Les Paul and the SG other than the shape of the body, and the thickness and composition of the wood. So why such distinct personalities?

The answer to that question shows us just how significant that thinner, all-mahogany body is in the equation. The classic single-cut Les Paul is best known for its thick, rich, warm tone with ample lower-midrange grunt and excellent clarity throughout the range, plus its singing lead tones when injected through a cranked amp, a high-gain channel, or a good overdrive pedal.

While, however, we think of thicker all-mahogany guitars as being “warmer” and “darker” than the Les Paul Standard’s maple-mahogany construction, the SG’s thinner body and higher neck/body joint lend the model a snappier, janglier voice that has a little more chime to it. The SG still has good warmth and depth, but it trades some of that lower-midrange grunt for brighter upper-midrange cut. Crank it up, and it will still wail and sing, of course, but it’s lead tone often leans a hair more toward “bite” while the Les Paul’s tilts slightly more toward “thick”.

All that being said, there’s a ton of crossover between the Les Paul Standard and the SG Standard, and, practically speaking, you can easily substitute one for the other for a good, oh, let’s say 78.35% of your playing without anyone taking a blind bit of notice (that figure was not arrived at under laboratory conditions, but you get the idea). Massive rock crunch and power-chord goodness? Check for both. Trenchant clean tones with full-bore humbucker body and girth? Check for both. Wailing rock-godliness when your solo comes up? Check for both.

Let’s just say, then, that the Les Paul and SG share a common soul, and they both have a lot of heart. When you need the added sonic nuance of some extra lower-midrange thump or that extra ounce of sustain, give a Les Paul a try. When you want a slightly more eviscerating breed of lead tone or a little more chime in your jangly semi-clean arpeggios, grab an SG. Otherwise, there’s no reason not to let your sense of esthetics—or what the heck, you probably need one of each anyway.

Dave Hunter   11.12.2018
Naperville Music, your home for everything Gibson.
mark@napervillemusic.com
This entry was posted in Gibson Guitar Stuff. Bookmark the permalink.