Note-for-note, Steve Jones just may be the most influential rock’n’roll guitar player ever.  Whaaaaaat!? Did I really just write that? Yes I did, and here’s why. Steve Jones only made one album of any significance. But that album was the Sex Pistols’ Never Mind The Bollocks. And there weren’t even many notes on that – it was just 35 minutes long. But Jones’ blazing Les Paul roar  – together with the Pistols’ nihilistic attitude – continues to be the 101 for any “punk” act, and that guitar sound is a benchmark for a lot of metal players, too. Of course his playing was fundamentally Chuck Berry-licks reheated, but no-one had ever done it like this before. And not so dramatically since.

Of course, other guitarists have been more influential overall: Hendrix, Clapton, Chuck Berry, Les Paul himself, BB King, Tony Iommi, <insert your favourite artist here>… But you’re talking substantial back catalogs with those guitar heroes. In Steve Jones’ case, you’re just talking about those 35 minutes. He came, he saw, he conquered, he ****ed off. That, folks, is amazing work. 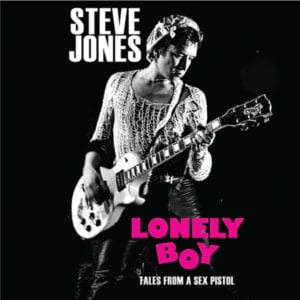 Even more so, as Jones became a guitarist by “accident”. In his teens, he decided to form a band – originally named The Swankers – of which he was singer, and he only picked up the guitar after [original guitarist] Wally Nightingale’s departure at the insistence of new manager Malcolm McLaren, and was then replaced by a vocalist whom Jones dubbed “Johnny Rotten.”

In a 2002 interview with Sex-Pistols.net Jones admitted, “I guess I learnt [guitar] properly about three months before we did our first gig. I didn’t really know anything on the guitar before that, maybe a couple of little bits and pieces. I didn’t know what I was doing. I still didn’t know what I was doing in those three months really. I just used to take a lot of speed and just play along to a couple of records over and over again, [The Stooges’] Raw Power and the New York Dolls’ first album.”

Jones’ actual favorite players were a little broader, even if he never attempted to emulate them. Jones told Gibson.com, “Mick Ronson was definitely a big influence. I was a mad Bowie fan growing up, with the glam and all that. And The Faces’ Ronnie Wood was one of the guys I loved growing up as a teenager. Pete Townshend was definitely an influence, but not as much as Mick Ronson and Ronnie Wood. The Faces were like my band. The Who had already been goin’ a long time. I’m not takin’ anything away from Pete Townshend; he’s a fantastic guitar player and brilliant songwriter. [With] Roxy Music, them three bands were my favorite bands growing up. I’d go and see them everywhere.

“And Mott the Hoople. Mick Ralphs was a great guitar player. And I liked Free, even though that was a little before my time. I thought Paul Kossoff was a great guitar player, too. Status Quo, there was another great band.”  So, pretty much classic taste for any English guitarist growing up in the ‘70s. But, somehow, the Pistols ended up sounding like none of them at all… 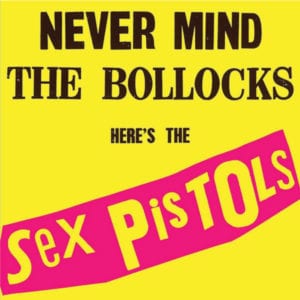 It’s just the one album that’s truly essential. Never Mind The Bollocks was essentially recorded as a 3-piece, with the band doing their best to keep the newly-joined Sid Vicious away from the studio. Glen Matlock – although the co-writer with Jones of many of the band’s best riffs – had been pushed out over personality clashes,and Jones would later caricature Matlock’s unsuitability for the Pistols as down to his habit of washing his feet in hotels rooms!

Jones later explained, “Sid [Vicious] wanted to come down and play on the album, and we tried as hard as possible not to let him anywhere near the studio. Luckily he had hepatitis at the time.” To appease Sid his bass is in the mix to a tiny degree (“he’s fumblin’ around on ‘Bodies’”), but the majority, Never Mind… was recorded with Jones playing guitars and bass. And, looking back, it’s baffling that the Pistols were ever derided as a band that “couldn’t play.” Jones and drummer Paul Cook could play their asses off – eventually – even if they kept things simple. Session guitarist Chris Spedding, who had produced their early demos, recalled: “All that stuff about them not being able to play was rubbish. When [potential producer] Mickie Most heard them he presumed the guitar player was me. So did [eventual Never Mind…] Chris Thomas. But The Pistols could play.”

Jones told Yahoo! Backspin this year, “It was some of the best times, recording. I enjoy recording more than playing live. It was about creating a sound. It wasn’t a case of going in and just saying, ‘let’s roll it, who cares what the drums sound like.’ It wasn’t like that at all. That’s why we picked Chris Thomas. Me and Cooky were big fans of early Roxy Music and he’s produced a couple of their albums. He was fantastic, Chris Thomas and Bill Price, the engineer. I don’t know what he thought of us –  he’s just finished an Elton John record, or something – but they adapted to what we were doing. And when I first heard the finished version of ‘God Save The Queen’, I knew it was great. But I didn’t know how people would be talking about it 40 years later.”

In Eagle Rock’s Classic Albums video documentary, Thomas recalls how he did work hard on “orchestrating guitar parts”, but the raw talent was already there. The late Bill Price, who’s main job as co-producer was to capture Jones’ multiple tracks, put it simply: “Steve Jones was, and still is, just about the tightest lead guitarist I’ve ever heard in my life”… and Price was a man who engineered/mixed The Clash, The Cult, Bowie with Ronson and Guns N’ Roses. Indeed, such was Jones’ superbly metronomic talents, he even laid down the bass tracks after his guitars: and they were still bang on. The rhythm tracks were replicate takes, left and right channels, leading Thomas to say it wasn’t so a much stereo, as “mono deluxe.” He argued: “that’s the Sex Pistols sound, really. Barre chords; bass doing the same an octave below. E chords. Panzer Division!”It’s still one of the greatest rock guitar sounds ever recorded.

Post-Pistols, Jones and Cook’s The Professionals cut I Didn’t See It Coming (1981) which is more new wave-y – solid guitaring, but lacking the brutality of NMTB. Elsewhere, Jones has played on albums by everyone from Bob Dylan to Iggy Pop (on Iggy’s 1988 “metal” album, Instinct), as well as cutting a few solo albums. The closest he’s come to the Pistols sound again was on the self-titled album by Neurotic Outsiders (1996), a mainly Jones-led album with GN’R’s Matt Sorum and Duff McKagan and Duran Duran’s John Taylor. If you want to read Jones’ own story, get his 2016 memoir Lonely Boy.

Jones was notoriously light-fingered, and numerous guitars found their way into his hands. The sound of Never Mind The Bollocks is all Gibson, though. His main Gibson was a ‘74 Les Paul Custom in off-white finish. It notably had two stickers of female figures on the lower body. Syl Sylvain of The New York Dolls had given the guitar to Malcolm McLaren, the Dolls’ manager at the time, in lieu of paying McLaren for plane tickets (a long story we haven’t got space for here!) McLaren gave the guitar to Jones circa 1975, when he took over managing them. That said, Jones has said that over the years that he’s had “five or six” cream Customs. Gibson Custom produced a limited-run replica of Jones’ main Custom, complete with lightly-aged gold hardware, in 2008.

Jones also played black Les Paul Customs, a double-cut Les Paul Special, a Flying V (in the studio, where there’s a picture of him wearing one of the Pistols’ notorious “I Hate Pink Floyd” tees), and at the Pistols last (‘70s gig) he played a Gibson Firebird V. Don’t expect a lofty analysis as to why he loves Les Pauls, though. “That guy Wally (Nightingale), I nicked him a Les Paul,” Jones told Sex-Pistols.net. “I was always attracted to Les Pauls. I like Les Pauls, they’re more chunky. I dunno. They sounded kind of chunky, more than anything.”

Ultimately, getting the exact gear isn’t going to help you play exactly like Steve Jones. (Note: he also credits retro-fitted Gauss speakers in his Twin Reverb amp for his sound, although his pal Billy Duffy of The Cult is sceptical. He calls it a “lie” adding; “I think [Steve] still has a Marshall inside his.”) Of his own guitar style, Jones has said, “You get hundreds of ****s who wanna play like me, but none of them ever sound like it. It’s the thieving dirty fingernails! Iggy Pop calls me the Robert Mitchum of punk.”

Naperville Music, your home for everything Gibson.

This entry was posted in Gibson Guitar Stuff. Bookmark the permalink.